In the era of micriobiome and post-microbiome, tools are emergently needed to mine patterns and explore knowledge from micriobiome data. MicroPattern is a tool used to mine regular rules and patterns behind a list of microbes. As the rapid development of microbiome and metagenome, a number of studies have identified a lot of microbes associated with a variety of disease, phenotypes or traits. Therefore, it becomes very important and emergent for scientists to find informative patterns and knowledge behind the interested microbes identified in a study. MicroPattern is such a tool to mine regular rules and patterns and knowledge from a list of microbes.
The users can find usage details in the "Help" menu.

Step 2: enter your background microbe list (format same as step 1).
Note: It is not a necessary choice. By default, MicroPattern uses all microbes included in microbe categories as the background

Disease similarity based on the association between diseases and microbes can be calculated here. We have integrated 483 microbe-disease associations between 39 human disease and 292 microbes from published paper. Users can paste data in the textarea or upload file, which will be integrated with our data and used for calculating disease similarity. The data format is described as following:
1. No header;
2. The first column is diseases and the second column is microbes and the third column is evidence;
3. Different column should be separated by tab;
4. In the evidence column, 1 means the microbe increase while -1 means the microbe decrease. Here are example:
disease microbe 1
disease microbe -1

Enter your data or load your file

Recently, increasing studies of microbiome have identified a number of microbes associated with a variety of human disease and traits. For such a study, a number of analysis methods have been developed, including microbe abundance analysis, diversity analysis, and clustering analysis to analyze the microbiome data. These methods have a big contribution to microbiome research. However, in an era of post-microbiome, novel methods are emergently needed to mine patterns and explore knowledge based on data from microbiome.

The detailed usage of the MicroPattern is as followings:

[1] Visiting MicroPattern: Log on MicroPattern at http://www.cuilab.cn/micropattern, as shown in Figure 1. 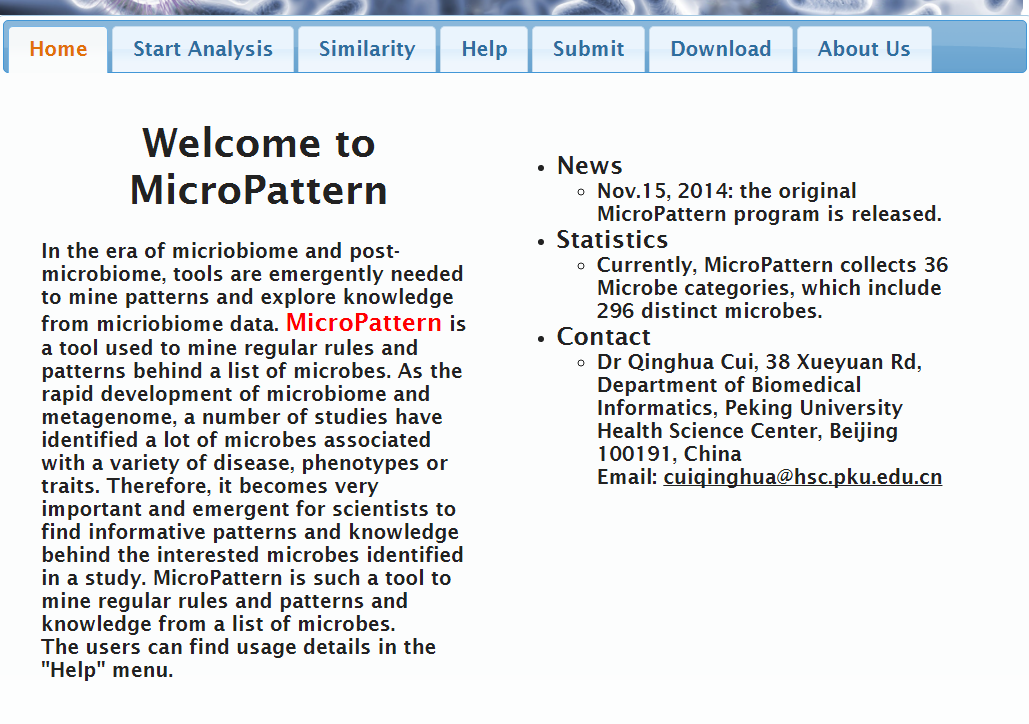 Figure 1.The homepage of MicroPattern 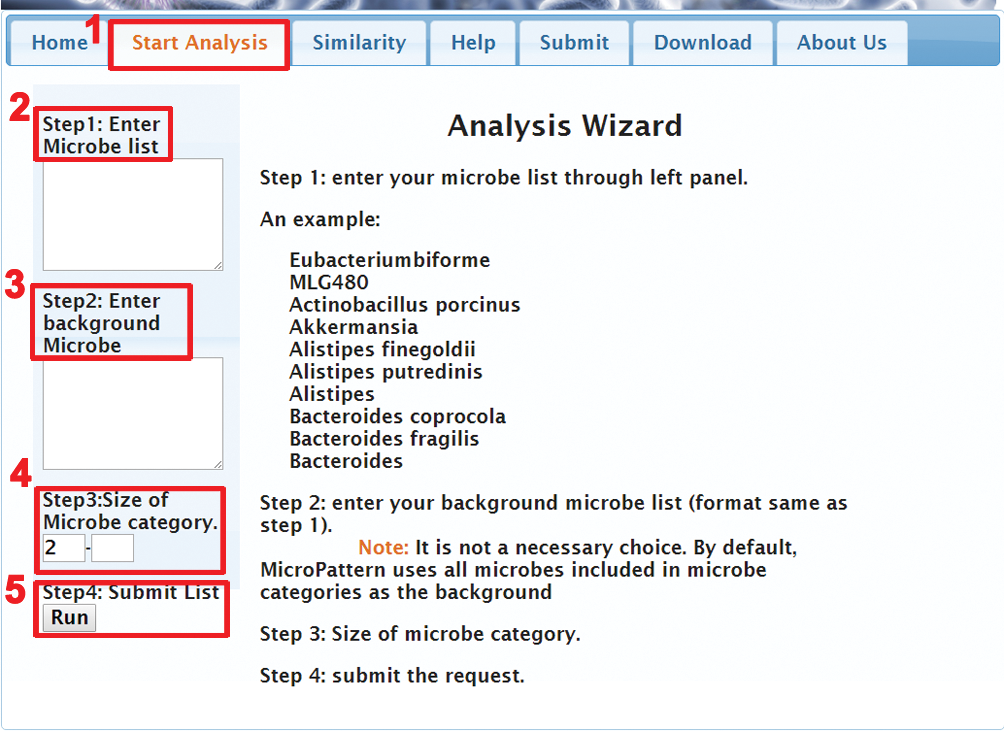 [3] Interpretation of the analysis result for MicroPattern. 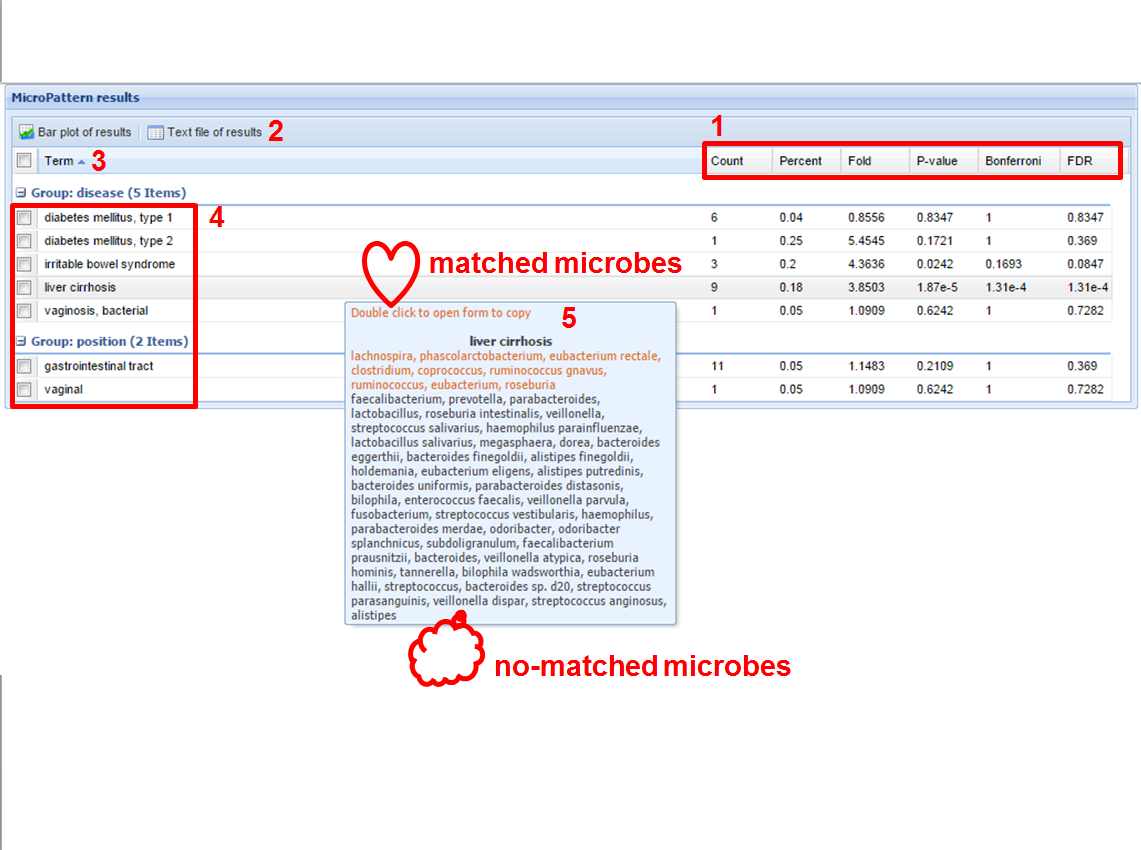 Figure 3. The result of MicroPattern analysis

The mined patterns by MicroPattern are shown in Figure 3. In this page, the users can further perform the following analysis.
(1) Ranking the mined patterns according their significance (Fold, p-value, Bonferroni, or FDR) by clicking corresponding menus (red “1” in Figure 3);
(2) Saving the whole analysis result into a TEXT file by clicking the button of “Text file of results” (red “2” in Figure 3);
(3) Drawing a barplot for interested microbe patterns (red “3” in Figure 3); For doing this, the users need to select the interested patterns (red “4” in Figure 3) and then click “Barplot of results” (red “3” in Figure 3).
(4) Showing the details of a matched pattern. By double-clicking a specific microbe categories (red “5” in Figure 3), one can see the details of one matched microbe pattern. The matched microbes in the corresponding category will be highlighted in red color.
(5) What do the results mean? If the input list of microbes is significantly enriched in one microbe pattern, it will mean that the input microbes associated trait is significantly correlated with the mined pattern. For the presented example, the result means that the animal-based diet associated microbes are significantly correlated with the liver cirrhosis associated ones. This pattern further suggests that there could be a connection between animal-based diet and liver cirrhosis. Increasing studies indeed support this microbe-based prediction made by MicroPattern (Hepatol Res. 2014 May 14. doi: 10.1111/hepr.12358). 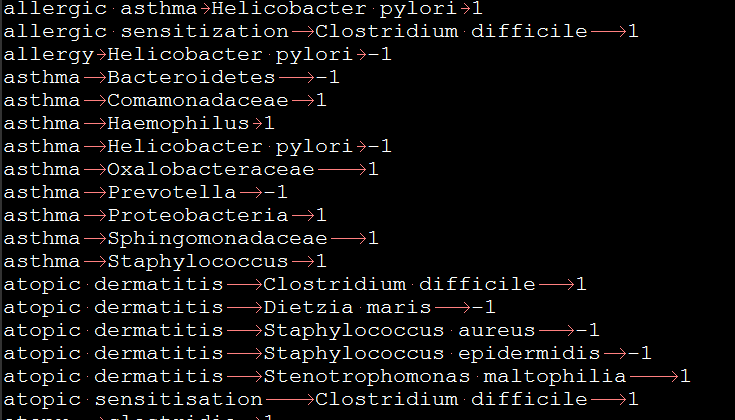 [4] In the result page, the first column and the second column are disease and the third column is the similarity between the two disease. The similarity that equal zero will be filtered.